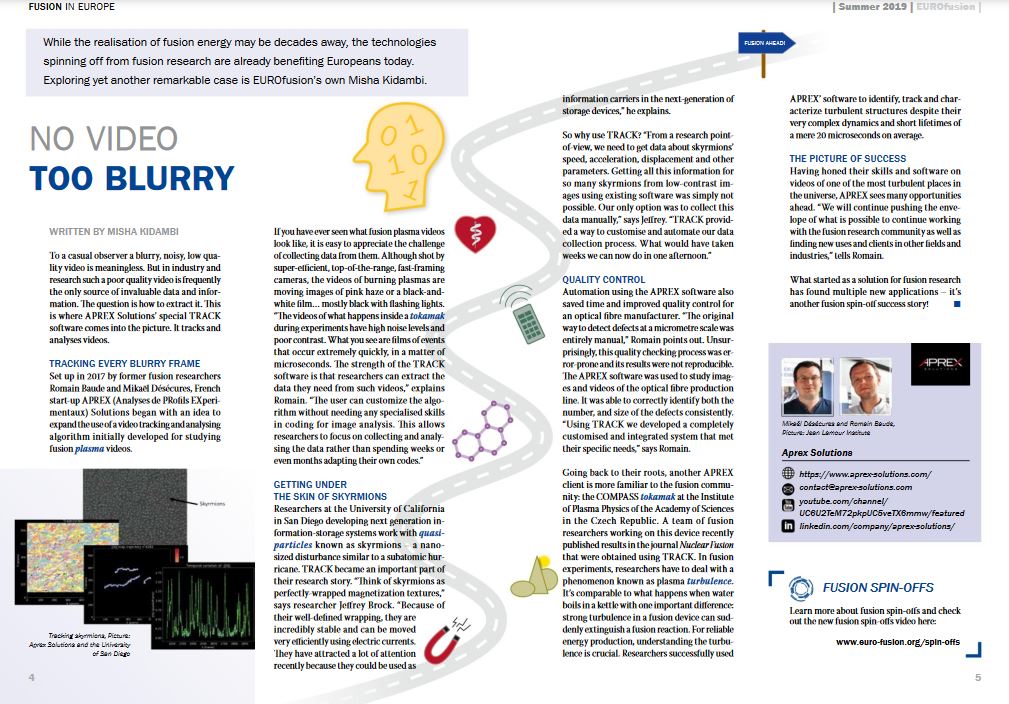 No Video too Blurry

While the realisation of fusion energy may be decades away, the technologies spinning off from fusion research are already benefiting Europeans today. Exploring yet another remarkable case is EUROfusion’s own Misha Kidambi.

To a casual observer a blurry, noisy, low quality video is meaningless. But in industry and research such a poor quality video is frequently the only source of invaluable data and information. The question is how to extract it. This is where APREX solutions’ special TRACK software comes into the picture. It tracks and analyses videos.

Set up in 2017 by former fusion researchers Romain Baude and Mikaël Désécures, French start-up APREX (Analyses de PRofils EXperimentaux) solutions began with an idea to expand the use of a video tracking and analysing algorithm initially developed for studying fusion plasma videos.

If you have ever seen what fusion plasma videos look like, it is easy to appreciate the challenge of collecting data from them. Although shot by super-efficient, top-of-the-range, fast-framing cameras, the videos of burning plasmas are moving images of pink haze or a black-and-white film… mostly black with flashing lights. “The videos of what happens inside a tokamak during experiments have high noise levels and poor contrast. What you see are films of events that occur extremely quickly, in a matter of microseconds. The strength of the TRACK software is that researchers can extract the data they need from such videos,” explains Romain. “The user can customize the algorithm without needing any specialised skills in coding for image analysis. This allows researchers to focus on collecting and analysing the data, rather than spending weeks, and sometimes months adapting their own codes.”

Getting under the skin of skyrmions

Researchers at the University of California in San Diego developing next generation information-storage systems work with quasiparticles known as skyrmions – a nano-sized disturbance similar to a subatomic hurricane. TRACK became an important part of their research story. “Think of skyrmions as perfectly-wrapped magnetization textures,” says researcher Jeffrey Brock. “Because of their well-defined wrapping, they are incredibly stable and can be moved very efficiently using electric currents. They have attracted a lot of attention recently because they could be used as information carriers in the next-generation of storage devices,” he explains.

So why use TRACK? “From a research point-of-view, we need to get data about skyrmions’ speed, acceleration, displacement and other parameters. Getting all this information for so many skyrmions from low-contrast images using existing software was simply not possible. Our only option was to collect this data manually,” says Jeffrey. “TRACK provided a way to customise and automate our data collection process. What would have taken weeks we can now do in one afternoon.”

From research to quality control

Automation using the APREX software also saved time and improved quality control for an optical fibre manufacturer. “The original way to detect defects at a micrometre scale was entirely manual,” Romain points out. Unsurprisingly, this quality checking process was error-prone and its results were not reproducible. The APREX software was used to study images and videos of the optical fibre production line. It was able to correctly identify both the number, and size of the defects consistently. “Using TRACK we developed a completely customised and integrated system that met their specific needs,” says Romain.

Going back to their roots, another APREX client is more familiar to the fusion community: the COMPASS tokamak at the Institute of Plasma Physics of the Academy of Sciences in the Czech Republic. A team of fusion researchers working on this device recently published results in the journal Nuclear Fusion that were obtained using TRACK. In fusion experiments, researchers have to deal with a phenomenon known as plasma turbulence. It’s comparable to what happens when water boils in a kettle with one important difference: strong turbulence in a fusion device can suddenly extinguish a fusion reaction. For reliable energy production understanding these turbulences is crucial. Researchers successfully used APREX’ software to identify, track and characterize turbulent structures despite their very complex dynamics and short lifetimes of a mere 20 microseconds on average.

The picture of success

Having honed their skills and software on videos of one of the most turbulent places in the universe, APREX sees many opportunities ahead. “We will continue pushing the envelope of what is possible to continue working with the fusion research community as well as finding new uses and clients in other fields and industries,” tells Romain.

What started off as a solution for fusion research has found multiple new applications. “We are optimistic that we will continue to find new markets in manufacturing and other high tech industries,” enthuses Romain.

Making sense of and pulling critical information from blurry images and video: yet another example of how developing the energy source of the future is helping drive innovation and build new businesses in Europe today.